Breathing a Sigh of Relief 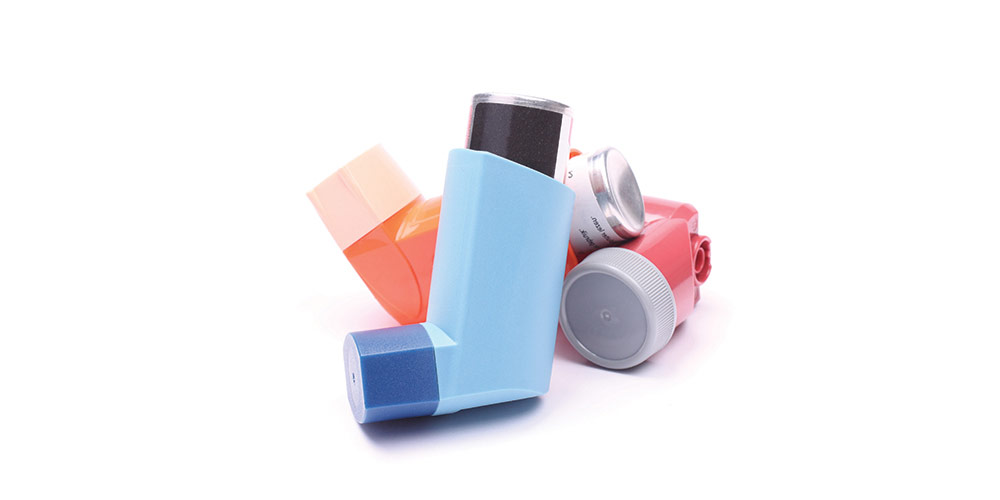 When it comes to treating teens and adults with persistent asthma, simpler is better, according to an analysis led by University of Connecticut researchers.

Findings that appear in the Journal of the American Medical Association show that using a single corticosteroid and long-acting bronchodilator treatment for both daily asthma control and for rescue relief during sudden asthma attacks is more effective than taking separate medications for daily control and rescue.

Standard treatment guidelines for persistent asthma in the United States currently suggest using different medications for daily control and rescue relief. Patients use an inhaled corticosteroid, with or without a long-acting bronchodilator known as a long-acting beta-agonist or LABA, for daily asthma control. Patients usually carry a second inhaler containing a short-acting beta-agonist (albuterol) for rescue relief when they have symptoms of wheezing, coughing, or a full-blown asthma attack.

For patients 12 and older with persistent asthma, the researchers found that Single treatment for Maintenance and Reliever Therapy, also known as SMART, resulted in significantly fewer asthma attacks, hospitalizations, and emergency room visits, compared to patients following the current standard of separate medications for control and rescue.

Asthma is a chronic lung disease that inflames and narrows the airways. About 25 million people in the U.S. have asthma; 7 million of them are children. While some individuals may only experience asthma when they exercise or in certain weather conditions, those with persistent asthma struggle to control their symptoms every day.

The UConn findings are part of a larger comprehensive review of asthma-related medical practices conducted for the federal Agency for Healthcare Research and Quality (AHRQ) at the request of the National Institutes of Health, National Heart, Lung and Blood Institute. The complete AHRQ report is available on the AHRQ website.

The UConn-led review encompassed 16 randomized controlled trials involving more than 22,700 patients to evaluate the effectiveness of SMART. The formulation used for the SMART approach was almost exclusively a single inhaler with a dry powder formulation of budesonide (a corticosteroid) and formoterol (a long-acting beta-agonist).

“The use of the corticosteroid-bronchodilator treatment for daily control is well established. The whole concept behind SMART is to use the same treatment for quick relief when it is necessary, eliminating the need to carry another different medication,” said UConn Assistant Professor of Pharmacy Practice Diana Sobieraj, Pharm.D., the study’s principal investigator. “These studies found that the corticosteroid-formoterol mix is effective not only when used for daily control, but also for quick relief. However, we did not review the evidence about side effects related to this practice.”

In a separate review also appearing in JAMA, a UConn-led analysis found that a new class of long-acting bronchodilators—known as long-acting muscarinic antagonists or LAMAs—significantly reduced the risk of exacerbations in people over 12 years with uncontrolled asthma when added to an inhaled corticosteroid, compared to a placebo.

However, LAMAs were not associated with a significant reduction in asthma exacerbations when compared to the use of long-acting beta-agonists or LABAs, when used along with an inhaled corticosteroid, the researchers said.

Commonly used to treat patients with chronic obstructive pulmonary disease or COPD, LAMAs are not currently incorporated into national treatment guidelines for asthma. The LAMA studies reviewed in the current meta-analysis focused almost exclusively on the long-acting muscarinic antagonist tiotropium.

The comprehensive scientific reviews reported in the two studies were led by a multidisciplinary team from the UConn School of Pharmacy’s Evidence-based Practice Center. The center is one of 13 nationally supported by the Agency for Healthcare Research and Quality, which is part of the U.S. Department of Health and Human Services. The centers review scientific evidence surrounding common medical conditions and new medical technologies to improve the quality and safety of national health care.

The AHRQ conducted its review of asthma treatments and protocols at the request of the National Heart, Lung and Blood Institute (NHLBI). The Institute sponsors national asthma treatment guidelines. The Guidelines for the Diagnosis and Management of Asthma (Expert Panel Report-3) was published in 2007.

The research reviews were sponsored by the National Heart, Lung and Blood Institute. They were awarded by the Agency for Healthcare Research and Quality through Contract No. 290-2015-00012-1.