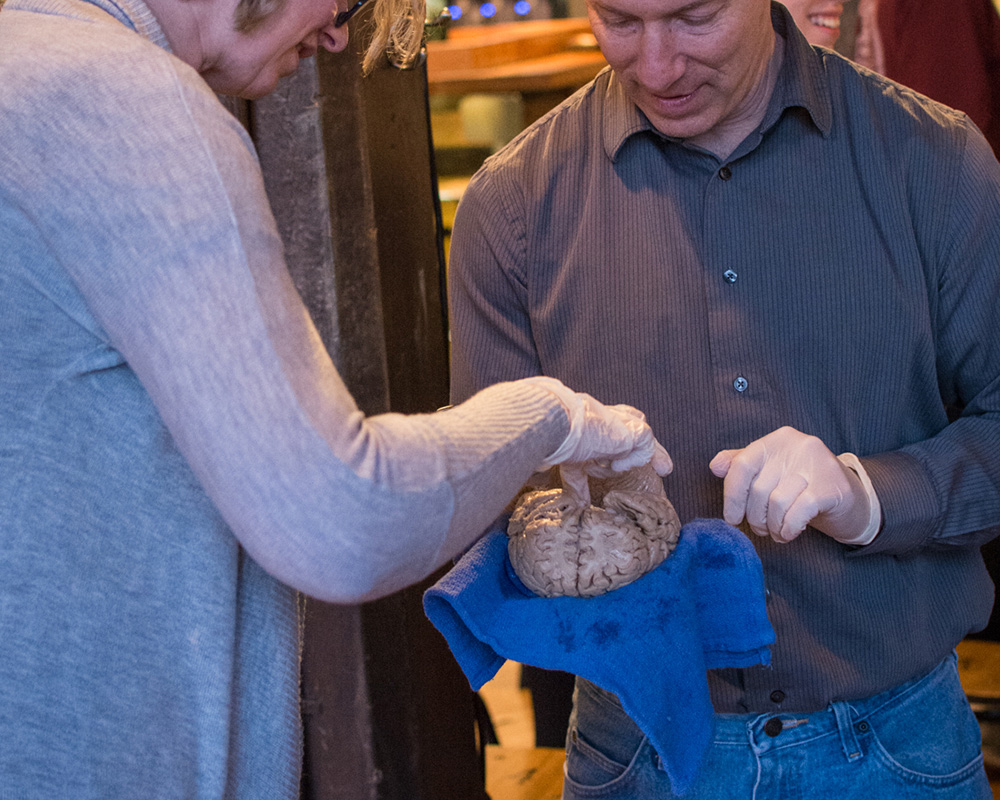 University of Kentucky College of Pharmacy festival brings scientific literacy to the community.

Science is all around us, from the photosynthesis of our houseplants to our WiFi connection to the medicines we take. Yet many people take for granted the scientific principles that influence every facet of our lives. The annual Everything is Science (EiS) festival, a free, public event hosted by the University of Kentucky College of Pharmacy, aims to change that. Launched in 2018, this weeklong event seeks to bring science literacy to the general community.

“We know there’s been a big push to increase nationwide STEM scores for high schoolers, as well as increase the public’s access to science,” said Dr. Vincent Venditto, assistant professor at the University of Kentucky College of Pharmacy and one of the EiS festival founders. “The other issue is, the number of applications continue to decline for colleges of pharmacy and many are not aware of the science coming out of these colleges. We wanted to find new strategies to encourage students to go into STEM fields and promote the type of translational science you often see at pharmacy schools.”

Rather than keeping scientific principles within the walls of academia, EiS sessions are held at various bars, restaurants and breweries throughout Lexington. This gives presenters and attendees a more relaxed environment to encourage community outreach and closer connections between the university and the general public. “By being able to reach the public in fun and engaging ways, we take down the ivory tower barrier that is often between scientists and the general public,” Venditto said.

As professionals at a land grant institution we are not only focused on pushing science forward for the state, but making that science accessible, improving the well-being and science literacy of our communities. Being on the committee, students really see the ins and outs of coordinating with venues, setting dates and meeting deadlines and interacting with the media, further honing their skills as professionals and scientists.

While many EiS speakers and organizers are UK faculty and researchers, the festival also encourages participation from professionals throughout the Commonwealth. From dietitians to photographers, participants are invited to explain the science behind their lines of work in the manner of a TED talk. This helps further close the gap between the community and academia. The theme for the 2020 festival, “Life in Technicolor,” also encouraged speakers to explore the connection between art and science.

All speakers must abide by one rule: no PowerPoint presentations. Rather than depending on slides full of graphs to illustrate their data, EiS speakers must use more engaging techniques. In a session on color temperature, one Lexington-based photographer used her own equipment to demonstrate, in person, how different light sources alter a photo’s color. Another speaker, in a session about the dairy industry, demonstrated how farmers use FitBit trackers to monitor dairy cow behavior in real time. Using real equipment and live demonstrations allows speakers to describe scientific principles more effectively; some educators even discover new presentation techniques to bring into their classrooms.

Planning an event like EiS begins the year before, when the UK College of Pharmacy holds an open call for anyone interested in participating, either on the planning committee, as a session coordinator or as a presenter. For the 2020 festival held this past February, many members of the planning committee included student pharmacists. “As professionals at a land grant institution we are not only focused on pushing science forward for the state, but making that science accessible, improving the well-being and science literacy of our communities,” said Venditto. “Being on the committee, students really see the ins and outs of coordinating with venues, setting dates and meeting deadlines and interacting with the media, further honing their skills as professionals and scientists.”

The College of Pharmacy is especially suited to host an event like EiS due to its “self-contained” nature, he added. The college can serve as a central knowledge base that connects to a diverse network of scientists and community members, which can “promote a cross-pollination of ideas” across specialties.

Informal and anecdotal evidence suggests that the event is having its intended impact. While the EiS organizers do not collect hard data on the event’s sessions, attendees are encouraged to fill out comment cards with commentary on the venues or the event itself, including topic and speaker suggestions. In 2019, EiS received about 220 comment cards, with 99 percent of respondents saying they would recommend the event to their friends.

This enthusiasm extends to the bars and restaurants that host the sessions as well as the festival coordinators. More local businesses have expressed interest in partnering and collaborating for the EiS festival, Venditto noted. Speaker coordinators also were surveyed after the event, when they were asked to respond to the statement that EiS is a positive experience. All coordinators responded with either “agree” or “strongly agree.”

While 2020 EiS had the highest attendance yet, with at least 50 people attending each of the 30 talks, advertising and raising awareness for EiS remain a challenge, according to Venditto. Awareness is particularly important to ensure that the festival is accomplishing its goal of improving science literacy. The EiS festival has partnered with other campus events including Engineering Day, an event geared toward elementary and high school students, and the UK Curiosity Fair, which allows campus professionals to demonstrate their work to undergrads. These partnerships enhance the breadth of the target audience that the EiS festival is able to reach.

Next year, a standalone website will be created for the event. In the past, it has been housed on a page within the College of Pharmacy website and this change will help increase the visibility of the festival. Additionally, the enthusiasm from the community was clear, with some attendees present every night of the week. However, this format overwhelmed some, and next year’s events will be shortened each night from three hours to two 75-minute sessions ending 30 minutes earlier (6:00 p.m. to 8:30 p.m.) to better accommodate those who are eager to attend every talk.

Additional plans for 2021 include refining the festival’s overall theme. EiS leaders hope to create a balance between being broad and specific, between abstract and concrete and between the arts and the sciences. One idea being considered for the next year, Venditto shared, is to have an artist and a scientist each give a talk and provide complementary views of the same topic. Emphasizing the link between the humanities and science can help solidify the idea that “Everything is Science.” P