Up Close and Personal with Pharmacy 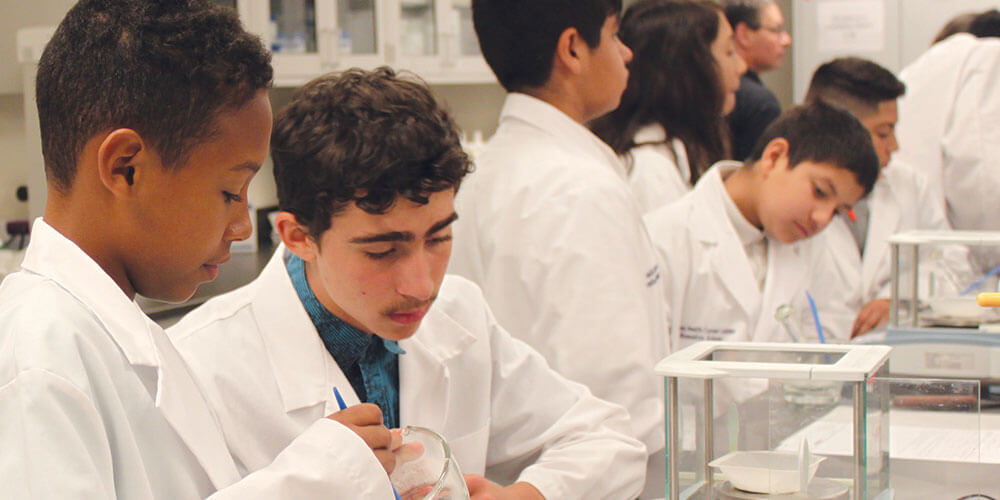 Programs at Western University of Health Sciences and Duquesne University are showing young students what the pharmacist can do—and powering the pipeline in the process.

By Athena Ponushis and Maureen Thielemans

Member schools are continuing to amp up efforts to recruit young adults to pursue pharmacy as a career and strengthen the pharmacy pipeline. Dr. Mario Jimenez knows such efforts work. As a senior in high school, Jimenez never considered pharmacy as a career, until a student pharmacist came to speak to his class.

Now, after working more than 25 years as a pharmacy owner, Jimenez is the one going to speak at high schools and junior colleges, in his role as Director of Diversity Initiatives at the Western University of Health Sciences College of Pharmacy.

Jimenez wants to break the myth that all a pharmacist does is count and pour, and show students what a career in pharmacy could really look like—give immunizations, provide travel medicine consultations, participate in smoking cessation and furnish prescription hormonal contraceptives.

Jimenez tries to draw the curiosity of students by talking about what pharmacists today can do—give immunizations, talk about travel medications, help with smoking cessation and prescribe birth control pills.

“Hopefully, I can reach one student out of each group of 80 or so, and then we will see future diverse pharmacists who can address the needs of our current population,” Jimenez said.

Hopefully, I can reach one student out of each group of 80 or so, and then we will see future diverse pharmacists who can address the needs of our current population.

AACP has made a commitment to enhance the pharmacy pipeline and to make its applicant pool more diverse to better reflect the population it serves. Recruiting students, changing public understanding of pharmacists and changing pharmacy students’ understanding of the public, are top priorities.

Pipeline programs at WesternU are doing just that:

Our pipeline programs are important because they reach into our highly diverse communities and expose youth to future opportunities in the health professions so that future graduates will be more representative of the local populations they will serve.

Dr. Daniel Robinson, dean of the College of Pharmacy at WesternU, expects to see the rewards of their pipeline programs in the next three to five years. “We have students who enter our program each year who represent as many as 20 countries of birth. Even with this tremendous diversity, we still suffer from underrepresentation of Hispanic, African American and Native American students. Our pipeline programs are important because they reach into our highly diverse communities and expose youth to future opportunities in the health professions so that future graduates will be more representative of the local populations they will serve,” he said.

Jimenez likes to tell students how actively his college supports diversity and he encourages faculty at other member schools to do the same. “I like to make that known to the students because a lot of times they might get intimidated and say, ‘Well, I don’t know if that school is really for me,’” he said. “They need to know that they are supported, that they can do this.”

At Duquesne University School of Pharmacy, efforts are in place to attract young students with an interest in science and math to the pharmacy profession, said Dr. Janet K. Astle, assistant dean for student services.

For two days in September, the School of Pharmacy hosted a table sponsored by Giant Eagle Pharmacy at the Williams’ Girls Rock Science Weekend, which is sponsored by the Carnegie Science Center. Girls from local elementary, middle, and high schools who are interested in STEM careers—everything from pharmacy to meteorology to robotics—visited with organizations to learn more about the various fields. Duquesne’s P3 students helped the girls complete some of the tasks a pharmacist would perform, such as compounding an ointment and calculating math problems based on a patient’s scenario. For example, the girls were presented with a case of an 8 year-old boy who was stung by a bee. Minutes later he has trouble breathing. They’re given the option of selecting an EpiPen® or EpiPen Jr®, with corresponding weight ranges in kilograms. Knowing that the patient weighs 63 lbs., they had to convert the weight to kgs and determine which product is best to use. For the younger girls, trying on white coats and listening to their own heartbeat using stethoscopes were popular activities, said Astle.

The Girls Rock weekend was such a success that the School of Pharmacy was asked to participate in the Carnegie Science Center Tour Your Future event. This half-day workshop provided the opportunity for girls to explore STEM careers in-depth. Fifteen participants, ages 12–17, signed up to spend a half-day on the Duquesne University campus where faculty walked the student visitors through the role a pharmacist plays in a mock emergency room situation. Faculty further demonstrated a SIM man experiencing an asthma attack and how his response changed once the appropriate medication was administered. Some of the girls were overheard saying, ‘Wow, I didn’t know pharmacists could do all this,’ Astle noted. “It really did open their eyes and they left excited about the possibilities,” she said. Astle added that the feedback from Carnegie was also very positive, and she is eager to participate again next year.

Meeting young students in their current classrooms is also important to the recruitment efforts. The School of Pharmacy has engaged its Phi Lambda Sigma honorary leadership society members to visit local middle and high schools to deliver interactive presentations about pharmacy as a career.

Maureen Thielemans is Associate Director of Communications at AACP
and editor of Academic Pharmacy Now.