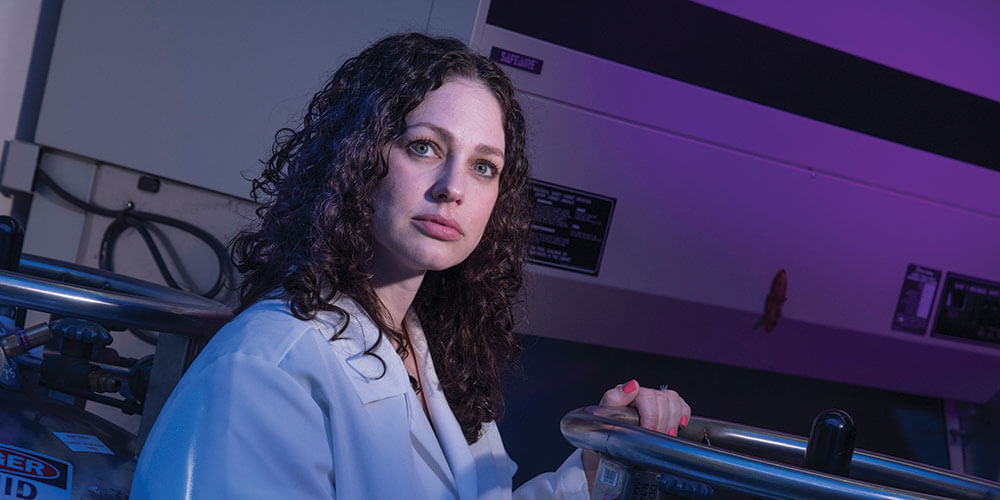 In a remote, mountainous region in western Sudan known as Jebel Marra in 2016, the rocket attacks came often and without warning. Homes were decimated. People and livestock were killed. Others, especially children, suffered horrible burns to their body.

More than 30 rocket attacks occurred that year in Jebel Marra, believed to be a rebel stronghold by the Sudanese government. The Sudanese military forces, which have been implicated in similar attacks, are believed to be behind these too, according to Amnesty International (AI), which collected evidence and eyewitness accounts from survivors. Amnesty went public in September 2016 with a 100-page report and a press conference to publicly name the government of Sudan as a perpetrator of chemical warfare.

Amnesty put together its report with the help of Dr. Jennifer Knaack, assistant professor in Mercer University’s College of Pharmacy. Knaack lends her time to the American Association for the Advancement of Science’s On-call Scientists program, which connects scientists, engineers, and health professionals to human rights organizations seeking expertise. She and another scientist who lends time to On-call, Keith Ward, formerly with the Department of Defense, reviewed Amnesty’s photos and survivors’ accounts. They determined the wounds were consistent with those previously seen from chemical weapons and that the likely weapon was sulfur mustard, a gas that can form large blisters on exposed skin and in the lungs.

Knaack and Ward’s analysis was included in the report, which also was submitted to the United Nations. The report contained many grisly photos of injured children, women and men. Amnesty believes that more than 200 people were killed in the 2016 attacks; there is little to no health care in the area so many people went untreated.

“I’d like to see that nobody gets away with chemical weapons attacks, and that the people who are being attacked are getting some supportive therapy or aid,” she said. “I’m really passionate about this, and this is a priority for me, because if I’m not able to go into these areas to directly help people, then I can do this.”

Knaack and Ward attended the press conference at the U.N. General Assembly meeting in New York. There, Knaack fielded questions from journalists and was interviewed on-camera by the French news agency Agence France-Presse. She also was quoted by CNN.

Last October, Knaack participated in a conference call with the Organisation for the Prohibition of Chemical Weapons (OPCW) in The Hague. The OPCW and U.N. meetings took place an in effort to increase awareness of the attacks and to persuade the U.N. to investigate the Sudanese government.

“I can’t stop people from releasing these agents and people being exposed to them, but I can at least help call attention to the problem and hopefully contribute to stopping it,” she said.

Knaack also worked with Amnesty on the use of alleged nerve agents in Syria in 2013 and 2017 and has counseled staffers on how best to collect samples in the field. Before joining Mercer’s faculty, Dr. Knaack worked for the Centers for Disease Control and Prevention as a chemical warfare expert where she developed and studied tests to determine if a person has been exposed to chemical warfare agents. At Mercer, she oversees a lab where she and her team of graduate students develop diagnostic methods for measuring exposure to synthetic or natural toxins.

Kay Torrance is director of communications and marketing
at Mercer University College of Pharmacy in Atlanta.