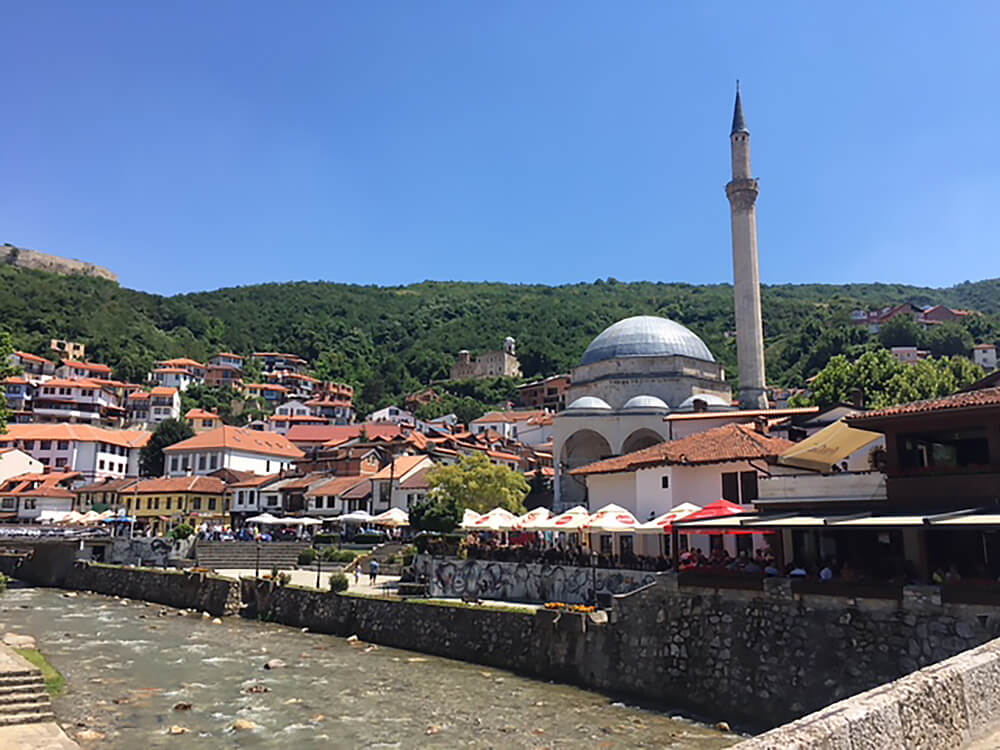 Shane Desselle shares his experiences creating an assessment center at the University of Pristina in Kosovo through the Fulbright Specialist Program.

Dr. Shane Desselle, professor at Touro University California College of Pharmacy and former AACP board member, has seen a push around the globe for pharmacists to take a more prominent role in public health and be more directly involved with patient care. Serving as a Fulbright Specialist Scholar in Kosovo over 19 days last July, Desselle helped inform the creation of an assessment center at the University of Pristina. He found his Fulbright experience to be exhilarating. As he took in the culture and savored the food, he knew he wanted to share his story so that in the midst of this global move to elevate pharmacy practice and education, other pharmacy scholars in the United States might take advantage of the Fulbright Specialist program, make an impact abroad and bring insights back home.

The opportunity for cultural and scholarly exchange has always appealed to Desselle, but he did not see how he could participate in the Fulbright Program, leaving his family and work for several months. Continually hearing about the compelling work Fulbright scholars were doing, he explored Fulbright further and found the specialist program, which allows academics and established professionals to engage in project-based exchanges with host institutions around the globe for two to six weeks. Desselle thought he could do that. “To be able to travel and share scholarly discourse and scholarly ideas with people in similar disciplines as mine in other parts of the world, while getting to experience their food and culture, learn some things about how their government works and how pharmacy works in that particular country, as well as how things are financed regarding medication use systems and policy, is extraordinarily compelling,” Desselle said.

Though it’s recommended that applicants develop a relationship with a potential host, Desselle did not. He built his application around his strengths: being a scholar with expertise in assessment and development of mentorship programs, as well as being productive in writing, as the founding editor-in-chief of the peer-reviewed journal Research in Social and Administrative Pharmacy. During a fortuitous conversation with a fellow academic abroad, Dr. Kreshnik Hoti, vice dean for the Faculty of Medicine at the University of Pristina, Desselle casually mentioned being on the Fulbright roster. The University of Pristina was looking for someone with experience in assessment who could help the school be more productive in scholarship of teaching and learning. Hoti submitted an application for Desselle’s services and Desselle was off to Kosovo.

The University of Pristina is the largest university in Kosovo. The flagship university of a developing country, it’s almost entirely funded by the government. Looking to become more elite and join the upper echelon of European institutions, Pristina leaders knew they had to develop an assessment center and improve their assessment of student learning outcomes. They decided that bringing in someone from the outside would be advantageous.

The focus of Desselle’s assignment was to inform the creation of a Center for Assessment for the Faculty of Medicine at the University of Pristina (Faculty of Medicine being akin to a College of Medicine that includes the schools of medicine, pharmacy, dentistry and other allied health sciences). Once the Faculty of Medicine got the assessment center up and running, it would serve as a model for other faculty/colleges to do the same. Leadership supported the project, envisioning the eventual establishment of an assessment center at the university level. During Desselle’s first few days there, he met with the rector (basically the president or chancellor of the university) as well as with all the vice rectors and deans of other faculties. This allowed Desselle to see what was currently in place at the university and showed him how much they supported his work.

So here we are, we’re at a university that’s centralized, bureaucratized, resource-constrained, and yet I met with faculty and students who are doing some really interesting, theory-driven work, and that was very compelling.

While the university was trying to deal with concerns over the integrity of its exams, it was also trying to set a higher standard regarding scholarly productivity of the academic staff within the Faculty of Medicine, adding another aspect to Desselle’s project. “A lot of people in developing countries, even though they have good data and so forth, tend to publish their results in more regional journals because their research might already have been conducted elsewhere, but they’re being done for the first time in that particular country,” he said. “So I came in, among other things, to help them leverage the research they have, change or tweak the research ideas that they have to make them more acceptable on a global scale, and to design and conduct the research in a way that it provides something novel. This might allow them to publish the results of their studies in global and impactful journals.”

Desselle found that the resource-constrained environment presented myriad challenges, given that the institution has to rely on much of its revenue and, to some degree, approval of its decision making from the government. “With a few more people getting training and becoming more versed in the language and culture of assessment, and with some investment in things like course management and assessment and tools, they might be able to free up people’s time and move away from performing more perfunctory tasks, such as being sequestered in a room to write questions [ensuring the integrity of exams], to higher-level cognitive and more engaged sorts of tasks that deal with assessment,” he noted. Since his time there, Desselle said the assessment center is taking root, as the university has appointed an individual to work with the government to secure resources for the center.

“What I took away from the University of Pristina is just how passionate people can be in a university system that’s inherently centralized and bureaucratic, how passionate its scholars are and how tremendously desirous they are of taking the university to the next level,” said Desselle, who specializes in social pharmacy and was able to meet students working in social pharmacy and presenting their master’s thesis defenses. “So here we are, we’re at a university that’s centralized, bureaucratized, resource-constrained, and yet I met with faculty and students who are doing some really interesting, theory-driven work, and that was very compelling.”

Anyone ranging from medicinal chemist to pharmacy practitioner to social pharmacy scientist to pharmacologist, there’s room for everyone within our broader pharmacy discipline to be able to contribute something to the Fulbright Specialist Program.

One student, Hyllore Imeri, presented her project on facilitating patient activation among community pharmacy clients, using Internet ads and social media means to more actively engage patients. Given the theory-based nature of the work, quality of research and Imeri’s extraordinary English language proficiency, Desselle spoke with Imeri and Hoti, her academic advisor, about having her apply to a Ph.D. program in social pharmacy in the United Staes. Imeri was accepted into several programs and will begin her studies at the University of Mississippi in August. Desselle will co-author a few papers to come out of Imeri’s master’s thesis. He and Hoti intend to continue publishing her work, hoping to keep working with her in a collaborative effort among the University of Mississippi, Pristina and Touro University California College of Pharmacy, where Desselle teaches.

“Just as I’ve seen in the past with students from Beijing, China, and from Mumbai, India, when the first students from another country end up in Ph.D. programs at a particular school or two in the United States, it opens doors for others,” Desselle said. “The hope is that Hyllore will encourage other students and when they see her coming to the United States and succeeding, they will want to apply to Ph.D. studies here, as well. So it establishes a gateway for potential Ph.D. students in pharmacy, because even though we have a number of applicants from certain countries, we definitely could open the door for students from more regions around the world to at least entertain the thought of doctoral training in the United States.”

To pharmacists interested in the Fulbright Specialist Program, Desselle advises contacting a potential host institution and finding an advocate, not only for the application to be successful but for the visit to be successful. He said Hoti’s advocacy was instrumental the entire time he was in Kosovo. Academics must gain support from their universities as soon as possible, so whenever they are called upon their schedules can be flexible. Presenting a formidable application that builds trust using a strong record of publishing in a certain area is key to Fulbright application evaluators. He encourages his peers to consider the program and keep an open mind about all the places they might go. “Anyone ranging from medicinal chemist to pharmacy practitioner to social pharmacy scientist to pharmacologist, there’s room for everyone within our broader pharmacy discipline to be able to contribute something to the Fulbright Specialist Program.”