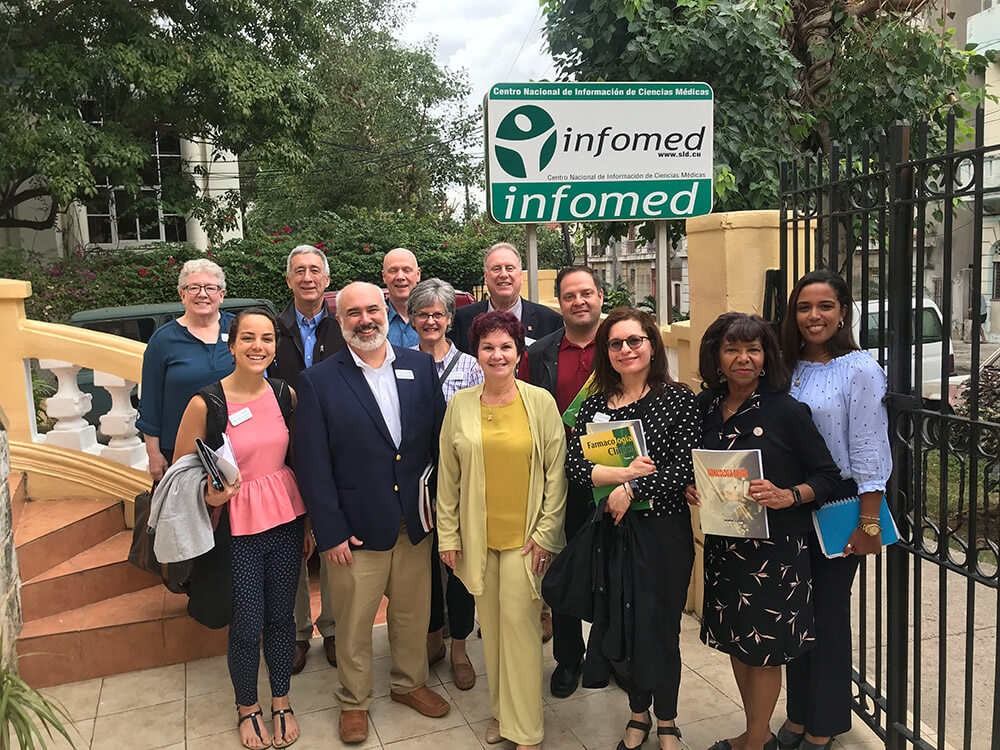 An AACP delegation got a peek at how the past and future come together to comprise Cuba’s healthcare infrastructure.

A recent trip to Cuba by a group of pharmacy university deans and other officials from the United States revealed a country with pharmaceutical practices rooted in the past but a medical system where large numbers of doctors provide easily accessible care to citizens. In a program sponsored by the American Association of Colleges of Pharmacy (AACP), the delegation met with representatives from the Cuban national health system, drug development and the local primary care clinics during a four-day tour through Havana last January.

The U.S. entourage found Cuba’s healthcare reflected two distinct worlds, its medication-dispensing pharmacies a throwback to years ago like the 1950s cars lining Havana’s streets. But its universal healthcare delivery system exemplified home health: doctors and nurses live within the communities and open their doors to all-hour care for their neighbors.

In between official meetings, the delegation found Cubans warm and gracious, hard working and receptive to their visitors to their historic homeland. They described wonderful dinners at local restaurants, for instance, in what ostensibly seemed a stress-free environment, although neighborhood signs reflected the aura of the Communist state. And yes, some visitors cruised downtown in vintage cars.

“Their emphasis is basic healthcare; it’s a national priority,” said Dr. Joseph T. DiPiro, dean and Archie O. McCalley Chair of the School of Pharmacy at Virginia Commonwealth University. “Given all the things they can spend money on, clearly a substantial portion goes into building an integrated system, from clinics to regional to specialty centers,” continued DiPiro, group leader and an AACP past president.

For the pharmacy academics, the Cuban pharmacies represented the apothecaries of a different era, with a relatively sparse selection of drugs, in sharp contrast to the multi-dimensional stores in the United States. Cuban pharmacists focused on dispensing essential drugs as they negotiated around many drug shortages in the country, with a surprising number of naturopathic options from China or India. The pharmacies were described as virtual drug distribution centers but did not offer widespread healthcare services such as immunization, which are routinely provided by pharmacies here.

While pharmacists regularly communicate with patients, the visitors were told that those conversations may not be as wide-ranging as they are in the U.S. because the usual give-and-take questions about healthcare are referred to doctors and nurses. Indeed, Cuba has a large number of physicians, with an estimated one provider for every 121 people, according to information provided to the delegation. Many physicians and nurses live in apartments that also serve as clinics, and they are available 24 hours a day. Physicians and nurses routinely make “house” calls to check on patients recently discharged from the hospital or for those who are physically unable to get to the clinic.

“We know that Cuba has many more primary care doctors than any other country,” said another member of the entourage, Dr. Paul Larrat, dean of the University of Rhode Island College of Pharmacy. “They devote considerable human resources to providing care and doctors are basically embedded in the neighborhoods. When something is wrong they can react quickly. They have achieved a high quality of life for their patients for the most part, which wasn’t a surprise.”

The availability of medical care in Cuba sharply contrasted to practices in the U.S., DiPiro agreed. “The number of physicians per unit of the population is very high,” he said. “They have much better access to physicians for primary care than we have.” In the United States, “it’s difficult to see a primary care provider even for routine care, and even if you have good insurance it could be weeks or months for routine types of things.”

In a country challenged with an aging population and serious chronic diseases like cardiovascular diseases, cancer and diabetes, Cuba’s emphasis is on wellness and preventative care. In most cases, that care was certainly linked to physicians and nurses, not pharmacists. “Seeing how the (Cuban) system operates, it’s an incredibly efficient system, much more centralized than ours,” said Dr. Russell DiGate, dean of the College of Pharmacy and Health Sciences at St. John’s University. “It’s socialized and everybody is considered the same here. People are entitled to be healthy and they stick to that. They spend a lot of time on the front end rather than dealing with diseases on the back end. It’s surprising how well they are doing with the limited resources they have. It’s a lesson that preventative care can work. They have specific institutes that deal with specific disease states.”

Dr. Shirlette Milton, interim dean of the Texas Southern University College of Pharmacy and Health Sciences, described Cuban pharmacies and healthcare generally as having an emphasis on “naturopathic products, diet, wellness and population health. It was good to see that integrated into the culture.”

During the wide-ranging tour, the visiting pharmacy faculty discussed policy at the Cuban Ministry of Health; learned about Cuba’s pharmaceutical research network; visited the National Center for Medical Sciences and community-based clinics; and met with representatives of Cuba’s regulatory Center for State Control of Drugs and Medical Devices (its version of the Food and Drug Administration) and the University of Havana Medical School. The delegation only briefly visited pharmacies but did discuss their issues.

“Pharmacy services in Cuba in primary care are still primarily dispensing-oriented, as they have been for many years,” said Dr. Beatriz Manzor Mitrzyk, clinical assistant professor and assistant research scientist, University of Michigan College of Pharmacy, who is writing a paper about the trip. “I think this continues because resources are limited in Cuba and the pharmacist in the community setting has an important, time-consuming role managing the supply of medications and assessing the medication needs of the community. Cuba has a national health system that is universal, free and founded on the principle of preventive medicine.”

With data perhaps moving more easily in the U.S. from the patients to pharmacists to physicians, Cuban healthcare professionals “can learn from the U.S. how we deliver clinical information to the patient and how we follow up,” said DiPiro. “We can learn from them the importance of being personal communicators and knowing the patient.”

Moving Ahead in Research

The American pharmacists were introduced to medical research and the biotechnology industry in Cuba, which is moving ahead despite the economic consequences of the half-century embargo by the United States, Mitrzyk said. She said the country’s biological programs were equipped with the latest technology “to guarantee that best practices are followed through the National Coordinating Center.”

The Cuban officials spoke about developing high-end biologics products and being involved in advanced clinical trials through a large academic and medical center in Havana. Cuba makes many of the generic medications and vaccines administered in its country. Cuba’s immunization rates have improved infant mortality in a way that “is comparable or better than in more prosperous countries,” DiPiro said. Because of high vaccination compliance, Cuba reportedly eradicated measles in 1993.

A key research project in Cuba was the development of Heberprot-P, a recombinant human epidermal growth factor that is injected into a diabetic wound, which appears to accelerate healing of diabetic foot ulcers and reduces amputations, according to Mitrzyk. “We visited their version of the FDA, and I was surprised at the quality of the laboratories they had there,” said Larrat. “The equipment was all first-rate, I was expecting something at a much lower level.”

The pharmacists said that a recent partnership between the U.S. and Cuba was considered a first biotechnology venture, with the effort geared toward advancing cancer therapy development. Although the Cuban pharmacists aren’t using electronic medical records, the nation has an online system that interconnects information centers and the medical libraries in Cuba.

Still, drug shortages are a constant in the country and pharmacists in Cuba were often preoccupied with maintaining the flow of medications in the country. Since shortages are prevalent, pharmacists often have to keep tabs on medication scheduling as well as drug development, specifically vaccines and biological and complementary medicine. While there is an emphasis on research, the U.S. pharmacists noted that Cuba is still hamstrung in some areas by a lack of advances in drug development.

“They have a lot of problems with drug shortages,” DiPiro said of Cuban officials. The U.S. embargo dramatically limits the type of drugs that Cuba can import, and often the country relies on pharmaceuticals manufactured within the country and also from others such as India and China, he said. “They have complicated supply paths to get medications.” That’s one of the reasons, the visiting pharmacists said, that Cuba appears to have, in certain cases, drugs that are not considered the most current and also why the country appears to rely on naturopathic, holistic or alternative medications.

“Often they may be out of certain drugs so management of them is important,” Mitrzyk said. “The pharmacist focuses on supply and demand and letting the government know what they need.”

As the participants recalled their trip, they said both sides can learn from each other. U.S. pharmacists can appreciate the length and breadth of the socialized medical system and medical accessibility to patients. Cuba can learn about the benefits of having a team-based approach to patient care, particularly pharmacists’ relationships with other members of a healthcare team.

The pharmacy faculty who were part of AACP’s delegation offered recommendations for any future trips to Cuba. They said it would be fruitful to extend the visit beyond Havana and see clinical care in the countryside and talk to patients outside the city. They also advised future travelers to read about Cuba’s healthcare system before making such a trip, and especially to have someone in the group who speaks the language.

The group enjoyed learning about and experiencing the country’s culture. “I’m a history buff and I really enjoyed seeing the influence of so much poetry and history and the modern artwork, the development from a bygone era,” Milton said. Mitrzyk termed the trip “very educational and emotional for me.” A Cuban-American, Mitrzyk’s late father and grandfather were physicians in Cuba. Her family left Cuba for the U.S. in 1960. “Cubans are taught from an early age to care for themselves as part of the country’s public health mission and to be good members of society,” she said. “ I believe we were shown the best that Havana has to offer.”