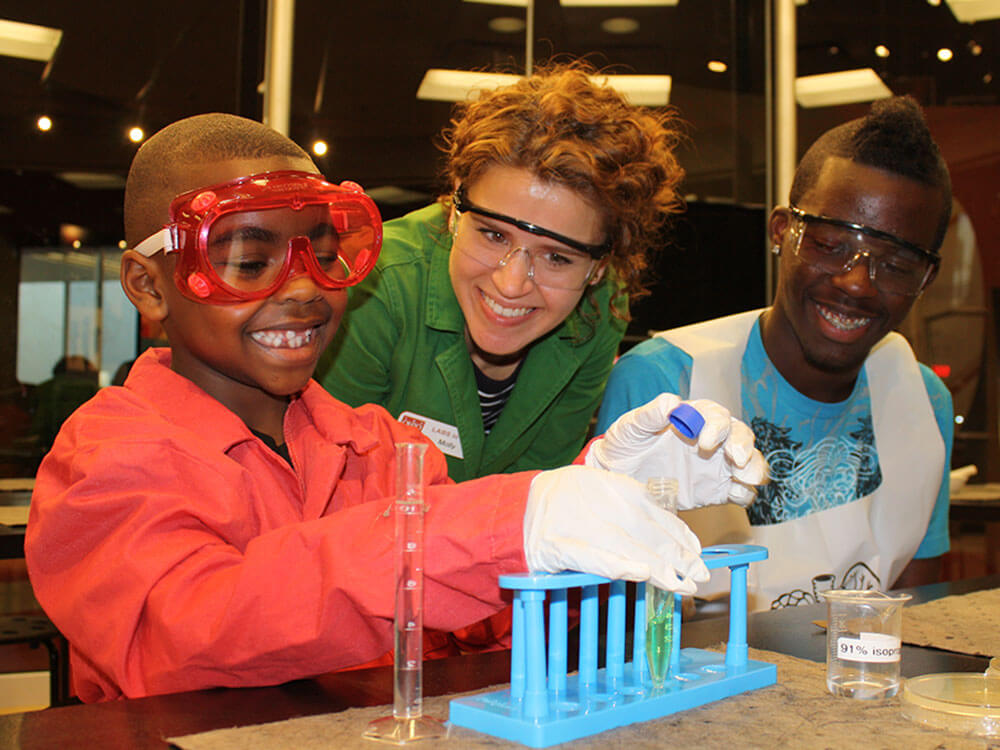 Schools of pharmacy are partnering with museums to put pharmacy on display and educate the public about the science behind pharmacy. Such exhibits are exposing younger students to science and engaging them in the scientific process. They are also honing the communication skills of the college students who cultivate them, as they learn to translate their knowledge into a language that people can understand.

Museums are creative by nature, and partnering with them has given schools another way to mobilize students to lead outreach activities and exercise their own creativity. Museum visitors have been intrigued and student pharmacists have been grateful for the practice.

“Who would have thought that as a pharmacy student you could learn how to talk about science at a museum? That’s a little unconventional, but it’s a great platform for the profession—to build advocates for pharmacy and show how safe medication usage can promote healthy lifestyles,” said Dr. Nicole Kwiek, assistant dean of undergraduate studies and director of Generation Rx at The Ohio State University College of Pharmacy. “Kids of all ages understand what medicines are, they get the context immediately, but it helps to get them thinking about safe medication-taking practices and teach them, ‘Who is a pharmacist? Why is a pharmacist important? How can I talk with a pharmacist?’ With this museum partnership, we can start to instill these ideas at a very young age.”

The Generation Rx Lab, an active drug education and research space, sits in a glass pod within the Labs in Life exhibit at the Center of Science and Industry (COSI) in Columbus, Ohio. Every day museum-goers come in and put on lab coats, white or tie-dyed, and wear stethoscopes around their necks and solve medicinal questions. The lab is staffed by Dr. Cynthia Canan, a postdoctoral fellow, and OSU student pharmacists who are enrolled in a science communication course or are on APPE rotation. Together, the team develops educational experiments for museum visitors to conduct during their visit, exposing them to the science behind drug action. Students lead the hands-on experiments, with a main attraction being Bob the Abra Cadaver, a medical robot that looks like a human patient.

Bob talks, he blinks, he breathes, he has a pulse and his pupils dilate. You can measure his vitals and put him in a medical crisis. Inconspicuous lab staff control Bob’s medical states from a computer off to the side. Visitors approach Bob much like they would a patient in grand rounds. Young children think of questions to ask Bob about how he’s feeling. Bob may say, “I have a headache. I ate some peanuts at a birthday party and I didn’t know it and now I feel a little woozy.” Guests start collecting data, writing on the lab’s glass walls. The student puts Bob in a more emergent situation. He goes into anaphylactic shock. The team agrees on a drug therapy and gives him an epinephrine shot. Then they talk about why the allergy attack happened and how the drug helped Bob.

The OSU College of Pharmacy started the Generation Rx Initiative in 2007 to address the problem of medication misuse and promote awareness of safe medication-taking practices. Partnering with and receiving funding from the Cardinal Health Foundation in 2009, the project has now grown to involve 120 schools of pharmacy with more than 60,000 students taking the message into their communities. Kwiek believes the initiative has been successful because it hits right at the heart of pharmacy while harnessing the students’ energy.

Brainstorming innovative ways to spread the message, Kwiek had the idea: “Wouldn’t it be great if we could showcase drug science in a museum setting?” Her research had shown that people found pharmacology topics to be captivating. In her postdoctoral work, she saw that high school students connect better with science topics when the science is introduced with a pharmacology spin, like learning a redox reaction not through rust but by learning how methamphetamines kill neurons. And she knew Columbus had an amazing science museum in COSI. Pharmacology may be a discipline that is normally taught at the post-baccalaureate level, but her thought was, “If we could find a way to take this content, distill it down and get it to the general public, to the children, parents and grandparents visiting COSI, then we could have them doing hands-on science, real experiments, learning basic scientific concepts and connecting it back to safe medication-taking practices.”

COSI visitors are now saving Bob seven days a week. Since 2012, COSI guests have been conducting experiments, like isolating their DNA, putting it in a vial and walking away with it, or crafting and testing their own hand sanitizer and testing it out by pressing their hands on petri dishes before and after they use it—all the while learning the science that underlies medicines. 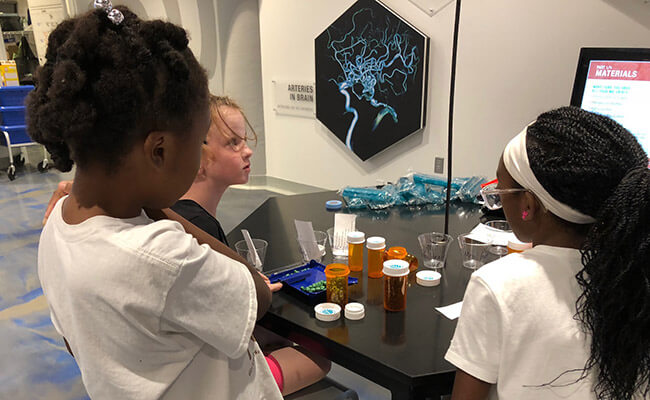 Pharmacy as a Gateway to Science

Because drug topics spark interest, the Generation Rx Lab is researching whether teaching science through a pharmacology lens can serve as an effective platform for people of all ages to engage in the scientific process and learn basic science concepts. Surveys indicate that visitors find the learning experience compelling and better than learning about medicine via other modalities because they are able to think like scientists.

“This information that they might be getting by simply reading or listening is not being conveyed as well as it is in the lab, where they actually get to do it, they get to design an experiment to test the medicine’s action,” Kwiek said. “They’re being led through a guided experience by our students where they have to actually design the experiments.…We don’t just give them instructions and tell them to do it. We present a problem and they figure out a way to address that problem through the scientific process. This allows them to develop their own abilities to create data-collecting strategies to answer a given question.” 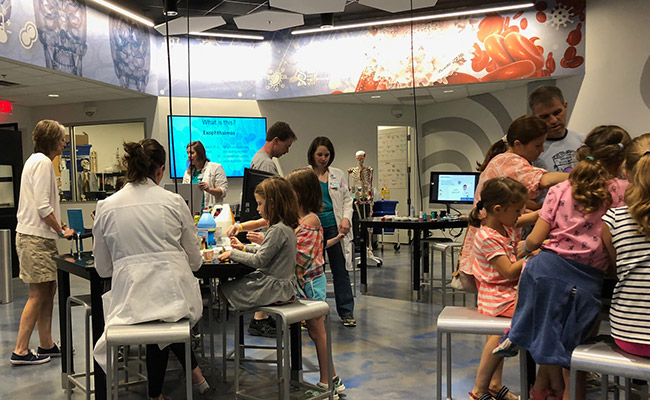 Kwiek was fortunate because the Labs in Life space in COSI is owned by OSU. Those glass pods were built years ago with the premise that museum visitors needed to see what research looked like, so making that connection was easy. Kwiek recommends that pharmacy schools looking to form similar partnerships leverage their outreach departments to make connections with the museum community and see what their needs might be surrounding health and wellness. They can then figure out a way to work together and make pharmacists accessible to the community through yet another venue. She emphasizes that such work does take resources. And as a matter of semantics, she cautions schools to use the word “medicines” rather than “drugs.” In her experience, museums may be nervous to talk about drugs, but talking about medicines isn’t controversial.

“We have what I would call the Cadillac version of a museum lab pharmacy experience, but it doesn’t have to be like that. There are museums clamoring for people from the university to help them with programming, and a college could set up a little area on the main floor and be interacting with visitors that way,” Kwiek said. “You don’t need a formal space. You can begin with a very small-scale student project and watch it grow, because if our experience tells you anything, it’s going to grow.”

Kids of all ages understand what medicines are, they get the context immediately, but it helps to get them thinking about safe medication-taking practices and teach them, ‘Who is a pharmacist? Why is a pharmacist important? How can I talk with a pharmacist?

Dr. Carolyn Ford, professor and director of Community Healthcare Outreach at Wingate University School of Pharmacy, saw how receptive the public was to her school’s first pharmaceutical museum exhibit, and now she’s dreaming up bigger hands-on-science displays for the future. Discovery Place, Charlotte, invited Wingate to participate in its fall Pharmaceutical Month exhibit. Faculty made field trips to the museum, museum staff visited school laboratories and the partners talked about how to enhance displays. “We negotiated, because as faculty we had some lofty ideas, so they had to help us refine them,” Ford said. “Our directive was to target third-to-sixth graders, but we knew all walks of life would be there—adults, babies, high schoolers—so we wanted to take advantage of this opportunity to share the positive aspects of pharmacy and potential pharmacy careers with the public.”

Wingate faculty brainstormed and student pharmacists brought their energy to create educational, engaging displays. They came up with a Wingate Jeopardy game to present the various roles in pharmacy to museum guests—nuclear pharmacists, embedded pharmacists, pharmacists on transitions of care teams. Students designed a “Know Your Pharmacist” game, lift-the-flap style, with statements like, “Pharmacists give shots. Fact or fiction?” Another game, “Bugs and Drugs,” created by Dr. Heather Kehr and Dr. Olga Klibanov, matched common bugs to drug treatments based on color-coding. Visitors could match an orange staphylococcus to an orange penicillin, for example, and place the pair on a full-size, human body puzzle on the skin, to learn why it is so crucial to wash your hands.

“Our core goal was to convey that pharmacy is a lot more than dispensing,” Ford said. “And pharmacists have a lot of skills. You need talents that most of the public is not aware of to be a pharmacist.” Of course, the museum staff thought the public would find dispensing interesting, so the school did include a simulation of filling prescriptions, with gel capsules and liquids and microliter pipettes, but insisted that filling prescriptions would not be the focus. “We tried to come up with activities that were simple and self-directed but also taught additional skills beyond pour this, count that,” Ford said.

Ford saw surprised reactions from museum visitors. She said many people did not know pharmacists were giving immunizations or they were not aware of the different roles available to pharmacists, so they were pleasantly surprised that these services and career paths were open to them. High school students working as museum volunteers reached out to Wingate faculty to learn more about the pharmacy profession. “These are juniors and seniors with advanced knowledge in science and math who are at that point where they’re about to decide what path they’re going to take and they are contacting our faculty to learn more about pharmacy,” Ford said. Likewise, Kwiek finds that her students staffing the Generation Rx Lab are showing self-reported gains in their abilities to talk about science and in their interests in pursuing teaching-type careers.

What surprised Ford most was the sheer volume of visitors. “One of the things from a pharmacy recruiting or pharmacy exposure standpoint that was very interesting is that up to 2,000 people can come through Discovery Place in one day. I’m thinking that if any school of pharmacy across the country had an opportunity to partner, that would be a great opportunity because you’re getting students at that formative age, and you’re getting their parents, and they’re coming here because they’re interested so it’s a self-selected audience,” Ford said. “It’s probably something that we have not looked at as a profession to really share with the public what our profession is about, but we should take advantage of the volume of people who would come to interact with the science of pharmacy.”

Generation Rx, a partnership between The Ohio State University College of Pharmacy and the Cardinal Health Foundation, aims to educate people of all ages about the potential dangers of misusing prescription medications. Pharmacists and student pharmacists around the country have embraced the program. Academic Pharmacy Now will highlight other Generation Rx programs in a future issue.