Frightful Fun in the Classroom 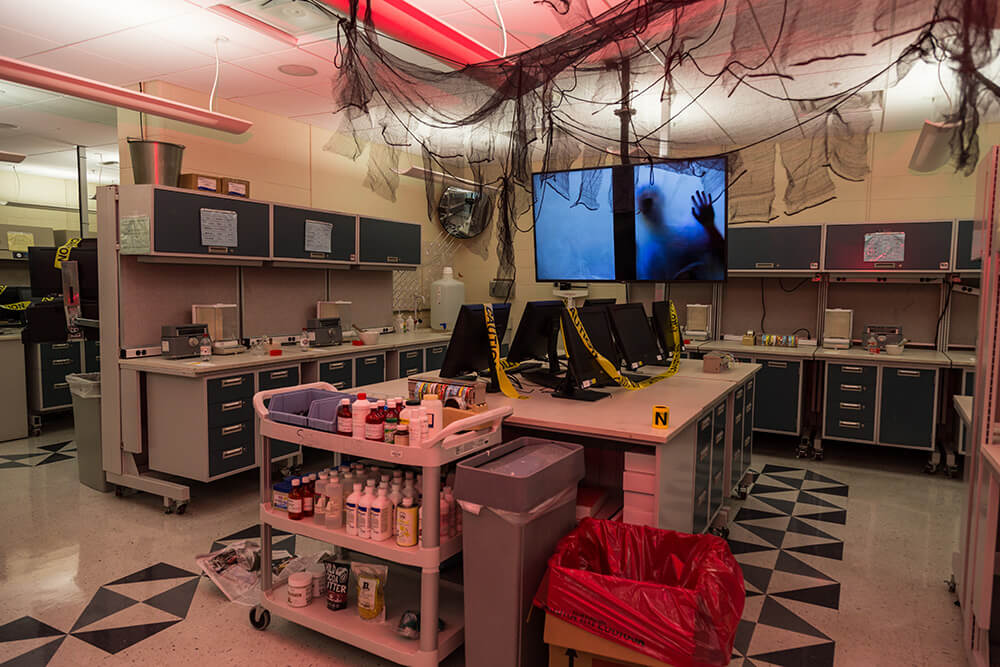 Yes. They’ve done it. They lived to tell.

For two years, the VCU School of Pharmacy has run electives for third-year students in advanced non-sterile compounding with a twist. Enter zombies. Spurred by this bit of horror fantasy, the professors turned a seemingly routine pharmacy course into an edge-of-your-seat experience. That’s because the real world offers those too: natural disasters, floods, power outages. So the professors put a method to the madness by enabling students to prepare pharmaceutical concoctions using the nearest herbs in a lab with no electricity, no running water and only the most antiquated equipment, making the experience as stressful as it could be without the reality of the danger. They pumped dreary music in the background, installed dark garbage bags to block sunlight and assembled cardboard cutouts of “The Walking Dead.” And yes, a zombie or two walking around with streaks of “blood.”

Dr. Lauren Caldas, assistant professor, dreamed up the idea for the elective because she wanted to be innovative and do things a bit differently for the 30 students in the non-sterile compounding course. She recalled saying to her partner, Dr. Abigale T. Matulewicz, also an assistant professor, “Hey, why don’t we do this elective and tie it to Zombie Week?” Both fans of “The Walking Dead,” they jumped on the idea of creating the zombie theme that ran through the course, which allowed students to learn real-life pharmacy skills. The two-week course began with student pharmacists evaluating an herb natural to Virginia that had medical properties that they could develop and ended with a zombie-in-your-face moment where the students had to put together medications in a fake hurry-up scenario to comfort people in pain over tooth ailments, at least in time to flee the clutches of any zombies and get real care.

“The beauty of this was how it teaches the same core concepts without having students reliving the actual traumatic event they’ve gone through,” Caldas said. “We have had students who have gone through a lot, these individual harrowing stories coming from war zones and everywhere. It teaches the same impressive skills of problem solving and thinking on your feet in a more relaxed environment. We wanted to elevate the learning environment and encourage the faculty to get out of their silos.”

I liked the idea of putting a constraint on compounding. When you have all the tools available, that’s not the real world—you have supply and equipment constraints. It highlights that in a fun way, kind of a real-world application. And there was the need to use spot-on critical thinking.

“We wanted to have the flexibility to do this as a fun thing versus a first-year compounding course, which is content-heavy and doesn’t allow for a lot of creativity,” Matulewicz added. “With a smaller number of students it allows for more unique things that we could do. It was a great way for students to be engaged, and also fun for us to be outside of the traditional teaching setting.”

A key component in the zombie apocalypse course design was an herb that could be a pharmaceutical source with medicinal properties to be used in the event of a catastrophe. Caldas thought of yarrow—a flowering plant known as a hardy perennial that grows in Virginia, essentially in the school’s backyard. The herb was used by Native Americans in the colonial days and is known for having anti-inflammatory and antiseptic properties, Caldas said. It has been used for years for fever, the common cold and even has been chewed on to relieve toothache, which was the source of “pain” for the would-be patients.

“Yarrow grows easily here and it is regularly used as a natural remedy like chamomile,” Caldas said. “Students used this natural product to create their own products, similar to creating a baking recipe from scratch.” That fits perfectly with non-sterile compounding, which is meant for something ingested by the mouth or skin rather than injected.

Caldas, an expert in labeling and dispensing, reached out to the School of Pharmacy’s Dr. Michael Hindle, a professor and expert in pharmaceutical analysis, and one of his doctoral students to research the medicinal properties of yarrow. Hindle spent months evaluating the substance and how students could extract and analyze medication from dried yarrow. At the outset, “we basically started from scratch with hard groundwork reviewing the literature, and sometimes what they do in the literature doesn’t always go as smoothly as described in the paper,” Hindle said.

The team evaluated the herb and analyzed active drug ingredients and what could be extracted from the plant. The aim was to “make it relevant to pharmacy students. This is something they heard about but did not do themselves,” Hindle said. “In turn, they would extract the active ingredient and successfully incorporate it into some compounding product.”

Preparing for the Worst

In the final class, the student pharmacists had a few hours to put together a formula designed to deal with fictitious patients’ tooth ailments before they could get medical care in the face of the zombie apocalypse. Many students focused on making a formula for mouthwash.

The students had to put together medications with equipment that was less than ideal. They used plastic utensils, dosing cups and soda bottles without access to computers, printers, dispensing software or running water. They couldn’t turn off all the lights in the lab—building manager’s orders—but they didn’t use electricity. Walls and doors were covered with black bags. There were spooky banging noises and actors wearing masks and fake blood with jarring laughs that made some students jump from their chairs. ”The zombies will not touch you, please do not touch the zombies,” Caldas reminded the students, laughing later. The lab room was also decorated with zombie-themed props and imagery, thanks to Dr. Krista Donohoe, an associate professor.

When it came time to prepare the concoction, “we told (the students) you are making something from scratch,” Matulewicz said. “We would have multiple versions of ingredients to ensure that all of the students were kind of progressing at the same pace and made it clear there wasn’t going to be a huge supply of everything,” she added. “I loved it when they went to the supply area and looked at what they needed and it wasn’t there. There were some panic moments, and they tried to figure out what they had, with bantering conversations, ‘I have this, can we have this?’”

The students had to use an old-school torsion balance for measurement, Caldas said, to achieve the goal of treating a “patient” in pain with a tooth infection or abscess. “They had to be ready with the formulation plan in mind.”

Ultimately, the student pharmacists created “unique mouthwash” formulas and the “random measuring tools made them think about what they were doing in a fun way, instead of just asking them in a multiple-choice test,” Caldas pointed out. “They had to create individual compounds with zombies walking around, with blood on them. They did an amazing job with the concept and theme.”

One of the toughest tasks was dealing with labeling because the labels had to be written by hand and that gave the students the most problems. “The students were so focused on being prepared to make the product, but what they needed to make the label made them realize how reliant they are on technology,” Matulewicz said. Caldas added, “When the software no longer auto-populates things for you, it’s difficult to remember.”

The student pharmacists gave the zombie apocalypse-themed study high marks. “The activity taught us all how to take the skills that we had been taught all semester and creatively apply it in a fun way,” said Hannah Davidson Keeney, a class of 2019 student pharmacist. “It’s relatively easy to follow written instructions on how to make a compound, but this activity put the ball in our court and we had to figure it all out on our own with the resources we were given. There wasn’t one single way to do it and that was the beauty of it.”

Michael Ong, class of 2020, liked the challenge of being forced to work in an atmosphere where there were limited options. “I liked the idea of putting a constraint on compounding. When you have all the tools available, that’s not the real world—you have supply and equipment constraints,” said Ong. “It highlights that in a fun way, kind of a real-world application. And there was the need to use spot-on critical thinking.” He thought more about it. “It was stressful fun.”

A Ghastly Idea With Appeal

VCU isn’t the only institution tapping into the zombie world for insight into dealing with urgent situations or emergencies. Several years ago, the Centers for Disease Control and Prevention launched an initiative to improve public awareness about being prepared. Its efforts focused on zombies. “Wonder why zombies, zombie apocalypse and zombie preparedness continue to live or walk dead on a CDC website?” the CDC said on its site. “As it turns out, what first began as a tongue-in-cheek campaign to engage new audiences with preparedness messages has proven to be a very effective platform. We continue to reach and engage a wide variety of audiences on all hazardous preparedness via ‘zombie preparedness,’” the CDC said.

Some other academic institutions also have tapped into zombies as learning aides. A few years ago, University of Rhode Island student pharmacists worked in a mock dispensing clinic and prevented a virus from causing zombies to attack. The University of Michigan School of Public Health used a zombie-themed bio preparedness drill to help spread the word about community disaster response.

After two years of zombie apocalypse, the VCU School of Pharmacy professors have decided to take a break from the activity and be “reflective” about what they have done, said Matulewicz. That doesn’t mean they are sitting pat. They are evaluating and publishing data from the program, conducting a student survey and may seek to share results from other schools. One of their papers, submitted to Currents in Pharmacy Teaching and Learning, emphasized: “An immersive simulation improved students’ overall knowledge and confidence in compounding a natural non-sterile product. Schools can utilize a similar approach to teach compounding skills for emergency preparedness.”

The School of Pharmacy may broaden the program to include first-year students, although no final determination has been made, Caldas said. Students loved the program and some were disappointed it was put on hiatus. Some pharmacy professors who initially were skeptical about the zombie apocalypse approach have come around to the idea. A colleague told Caldas he thought she was crazy to offer this course, she noted. “Then, he said, ‘our hospital lost power for eight hours and now I see the point.’”

Innovation is the key, she observed. “To the naysayers who say ‘this is not what we do,’ my argument is, why not?”